The build is called Trashus because you will absolutely TRASH your opponents with this build. Use Trasus to carry a push of cheap ranged units like scouters and artillerymen. 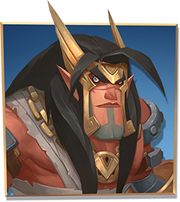 - Huntress to stun champions or big troops so you can easily hit your Q and miracles.

- Riflemen for a beefier ranged unit that can take a hit or 2.

- Centurion as a safety net push-stopping/push-carrying tank for when Trasus dies.

- Clerics to heal Trasus or centurions in a push.

- Scouters for a super fast and cheap unit that can deal damage quickly from range.

- Artillerymen for massive siege damage that can swim.

- Stimulant so your troops can take buildings down faster.

- Freeze is a mega powerful stun that can spread throughout water.

- Healing Powder for an emergency heal since you don’t always have food or time for clerics.

- Sir Prize to taunt troops or towers so Trasus can stay alive after his enrage ends.

- Keep Trasus alive and in position for the item spawns, since nothing is scarier than a Trasus with multiple items.

- Trasus is immune to not only death when enraged, but also debuffs, so don’t be afraid of the stuns from an enemy huntress, kaya, tuppi, hunter, ETC.

- Don’t play clerics, scouters, or artillerymen unless you have something tankier like a Trasus, huntress, centurion, or even some riflemen to support them.

- Try to save mana for multiple miracles at a time, since comboing an offensive miracle like stimulant with a miracle that disables towers like sir prize or freeze is key to victory.